In this example, we will show you how to wrap a machine learning model served by Ray Serve in a Gradio demo.

Specifically, we’re going to download a GPT-2 model from the transformer library, define a Ray Serve deployment with it, and then define and launch a Gradio Interface. Let’s take a look.

Deploying a model with Ray Serve¶

To start off, we import Ray Serve, Gradio, the transformers and requests libraries, and then simply start Ray Serve:

Next, we define a Ray Serve deployment with a GPT-2 model, by using the @serve.deployment decorator on a model function that takes a request argument. In this function we define a GPT-2 model with a call to pipeline and return the result of querying the model.

This model can now easily be deployed using a model.deploy() call. To test this deployment we use a simple example query to get a response from the model running on localhost:8000/model. The first time you use this endpoint, the model will be downloaded first, which can take a while to complete. Subsequent calls will be faster.

Defining and launching a Gradio interface¶

Defining a Gradio interface is now straightforward. All we need is a function that Gradio can call to get the response from the model. That’s just a thin wrapper around our previous requests call:

Apart from our gpt2 function, the only other thing that we need to define a Gradio interface is a description of the model inputs and outputs that Gradio understands. Since our model takes text as input and output, this turns out to be pretty simple:

For more complex models served with Ray, you might need multiple gr.inputs and gr.outputs of different types.

The Gradio documentation covers all viable input and output components in detail.

Finally, we can launch the interface using iface.launch():

This should launch an interface that you can interact with that looks like this: 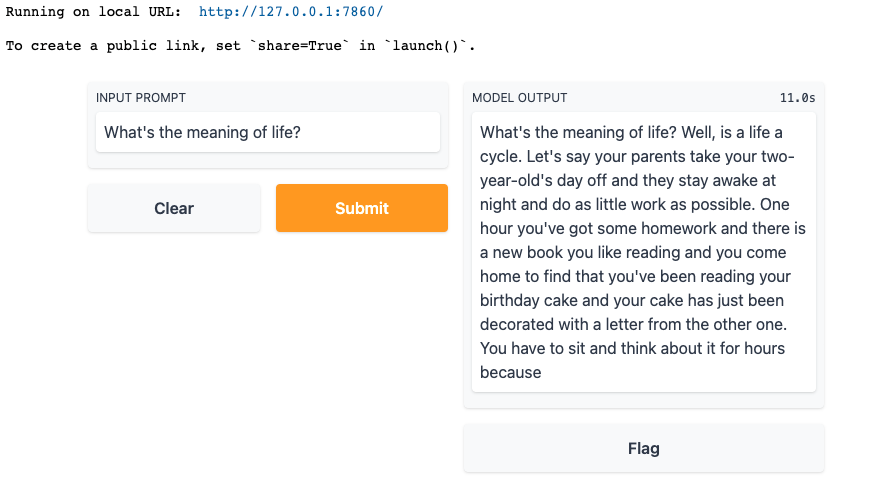 You can run this examples directly in the browser, for instance by launching this notebook directly into Google Colab or Binder, by clicking on the rocket icon at the top right of this page. If you run this code locally in Python, this Gradio app will be served on http://127.0.0.1:7861/.

Building a Gradio app from a Scikit-Learn model¶

Let’s take a look at another example, so that you can see the slight differences to the first example in direct comparison.

This time we’re going to use a Scikit-Learn model that we quickly train ourselves on the famous Iris dataset. To do this, we’ll download the Iris dataset using the built-in load_iris function from the sklearn library, and we used the GradientBoostingClassifier from the sklearn.ensemble module for training.

This time we’ll use the @serve.deployment decorator on a class called BoostingModel, which has an asynchronous __call__ method that Ray Serve needs to define your deployment. All else remains the same as in the first example.

Equipped with our BoostingModel class, we can now define and launch a Gradio interface as follows. The Iris dataset has a total of four features, namely the four numeric values sepal length, sepal width, petal length, and petal width. We use this fact to define an iris function that takes these four features and returns the predicted class, using our deployed model. This time, the Gradio interface takes four input Numbers, and returns the predicted class as text. Go ahead and try it out in the browser yourself.

Launching this interface, you should see an interactive interface that looks like this: 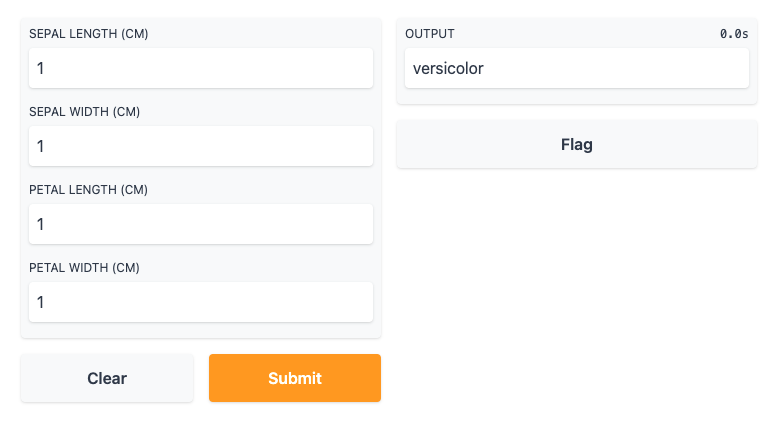 To summarize, it’s easy to build Gradio apps from Ray Serve deployments. You only need to properly encode your model’s inputs and outputs in a Gradio interface, and you’re good to go!