This section should help you:

Lifetime of a Ray Serve Instance¶

Ray Serve instances run on top of Ray clusters and are started using serve.start. Once serve.start has been called, further API calls can be used to create and update the deployments that will be used to serve your Python code (including ML models). The Serve instance will be torn down when the script exits.

If serve.start() is called again in a process in which there is already a running Serve instance, Serve will re-connect to the existing instance (regardless of whether the original instance was detached or not). To reconnect to a Serve instance that exists in the Ray cluster but not in the current process, connect to the cluster with the same namespace that was specified when starting the instance and run serve.start().

Deploying on a Single Node¶

While Ray Serve makes it easy to scale out on a multi-node Ray cluster, in some scenarios a single node may suite your needs. There are two ways you can run Ray Serve on a single node, shown below. In general, Option 2 is recommended for most users because it allows you to fully make use of Serve’s ability to dynamically update running deployments.

In order to deploy Ray Serve on Kubernetes, we need to do the following:

There are multiple ways to start a Ray cluster on Kubernetes, see Deploying on Kubernetes for more information. Here, we will be using the Ray Cluster Launcher tool, which has support for Kubernetes as a backend.

The cluster launcher takes in a yaml config file that describes the cluster. Here, we’ll be using the Kubernetes default config with a few small modifications. First, we need to make sure that the head node of the cluster, where Ray Serve will run its HTTP server, is exposed as a Kubernetes Service. There is already a default head node service defined in the services field of the config, so we just need to make sure that it’s exposing the right port: 8000, which Ray Serve binds on by default.

Then, we also need to make sure that the head node pod spec matches the selector defined here and exposes the same port:

The rest of the config remains unchanged for this example, though you may want to change the container image or the number of worker pods started by default when running your own deployment. Now, we just need to start the cluster:

With the cluster now running, we can run a simple script to start Ray Serve and deploy a “hello world” deployment:

Save this script locally as deploy.py and run it on the head node using ray submit:

Now we can try querying the service by sending an HTTP request to the service from within the Kubernetes cluster.

In order to expose the Ray Serve deployment externally, we would need to deploy the Service we created here behind an Ingress or a NodePort. Please refer to the Kubernetes documentation for more information.

Ray Serve is resilient to any component failures within the Ray cluster out of the box. You can checkout the detail of how process and worker node failure handled at How does Serve handle fault tolerance?. However, when the Ray head node goes down, you would need to recover the state by creating a new Ray cluster and re-deploys all Serve deployments into that cluster.

Ray currently cannot survive head node failure and we recommend using application specific failure recovery solutions. Although Ray is not currently highly available (HA), it is on the long term roadmap and being actively worked on.

Ray Serve added an experimental feature to help recovering the state. This features enables Serve to write all your deployment configuration and code into a storage location. Upon Ray cluster failure and restarts, you can simply call Serve to reconstruct the state.

Here is how to use it:

The API is experimental and subject to change. We welcome you to test it out and leave us feedback through github issues or discussion forum!

You can use both the start argument and the CLI to specify it:

While we have native support for on disk, AWS S3, and Google Cloud Storage (GCS), there is no reason we cannot support more.

In Kubernetes environment, we recommend using Persistent Volumes to create a disk and mount it into the Ray head node. For example, you can provision Azure Disk, AWS Elastic Block Store, or GCP Persistent Disk using the K8s Persistent Volumes API. Alternatively, you can also directly write to object store like S3.

You can easily try to plug into your own implementation using the custom:// path and inherit the KVStoreBase class. Feel free to open new github issues and contribute more storage backends!

A high-level way to monitor your Ray Serve deployment (or any Ray application) is via the Ray Dashboard. See the Ray Dashboard documentation for a detailed overview, including instructions on how to view the dashboard. 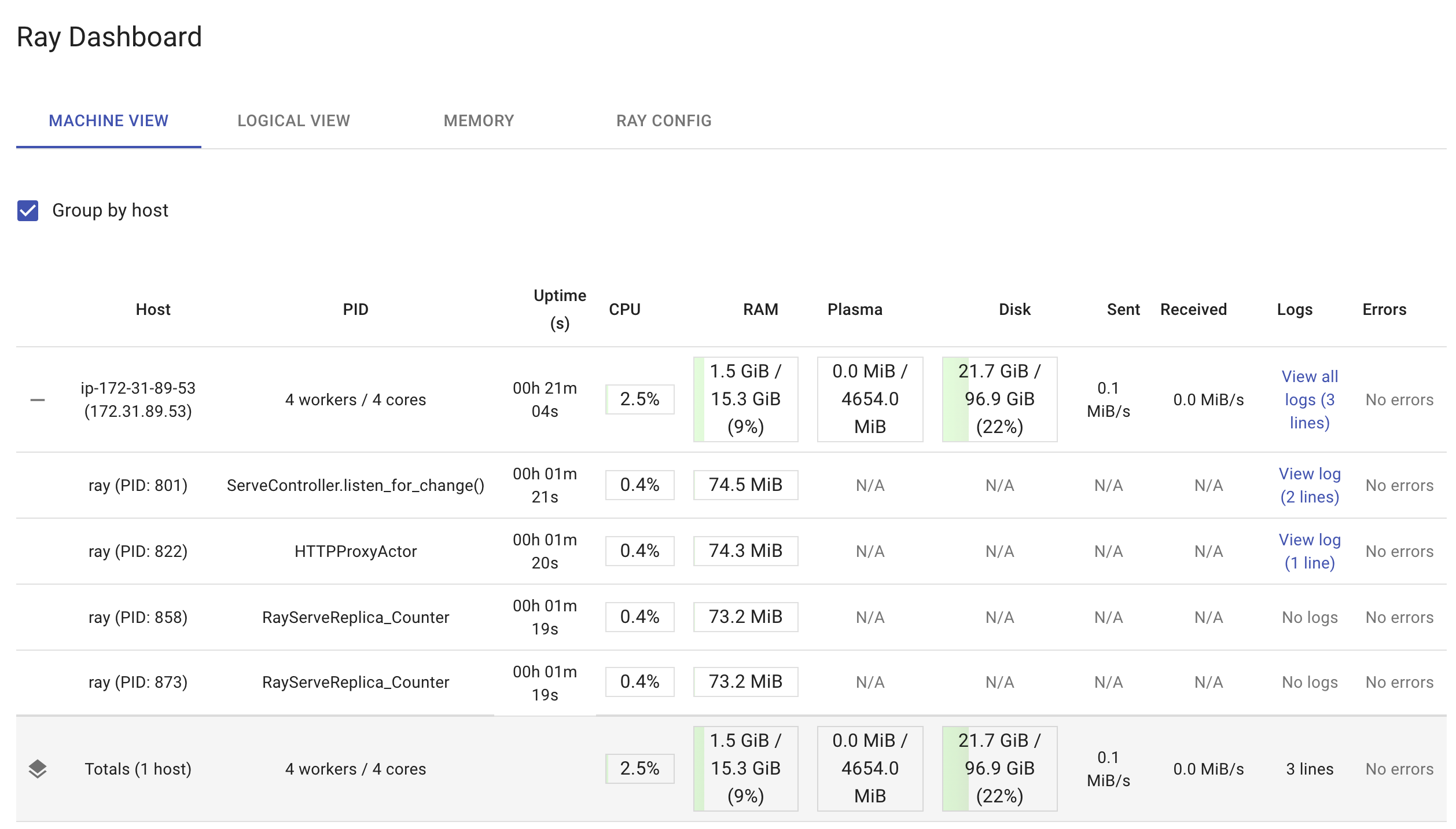 For an general overview of logging in Ray, see Ray Logging.

To write your own custom logger using Python’s logging package, use the following method:

If called from a deployment, returns the deployment and replica tag.

A replica tag uniquely identifies a single replica for a Ray Serve deployment at runtime. Replica tags are of the form <deployment_name>#<random letters>.

RayServeException – if not called from within a Ray Serve deployment.

PublicAPI: This API is stable across Ray releases.

Ray Serve logs can be ingested by your favorite external logging agent. Ray logs from the current session are exported to the directory /tmp/ray/session_latest/logs and remain there until the next session starts.

Here is a quick walkthrough of how to explore and filter your logs using Loki. Setup and configuration is very easy on Kubernetes, but in this tutorial we’ll just set things up manually.

First, install Loki and Promtail using the instructions on https://grafana.com. It will be convenient to save the Loki and Promtail executables in the same directory, and to navigate to this directory in your terminal before beginning this walkthrough.

Now let’s get our logs into Loki using Promtail.

The relevant part for Ray is the static_configs field, where we have indicated the location of our log files with __path__. The expression *.* will match all files, but not directories, which cause an error with Promtail.

We will run Loki locally. Grab the default config file for Loki with the following command in your terminal:

As above, you may need to replace ./promtail-darwin-amd64 with the appropriate filename and path.

Now we are ready to start our Ray Serve deployment. Start a long-running Ray cluster and Ray Serve instance in your terminal:

Now install and run Grafana and navigate to http://localhost:3000, where you can log in with the default username “admin” and default password “admin”. On the welcome page, click “Add your first data source” and click “Loki” to add Loki as a data source. 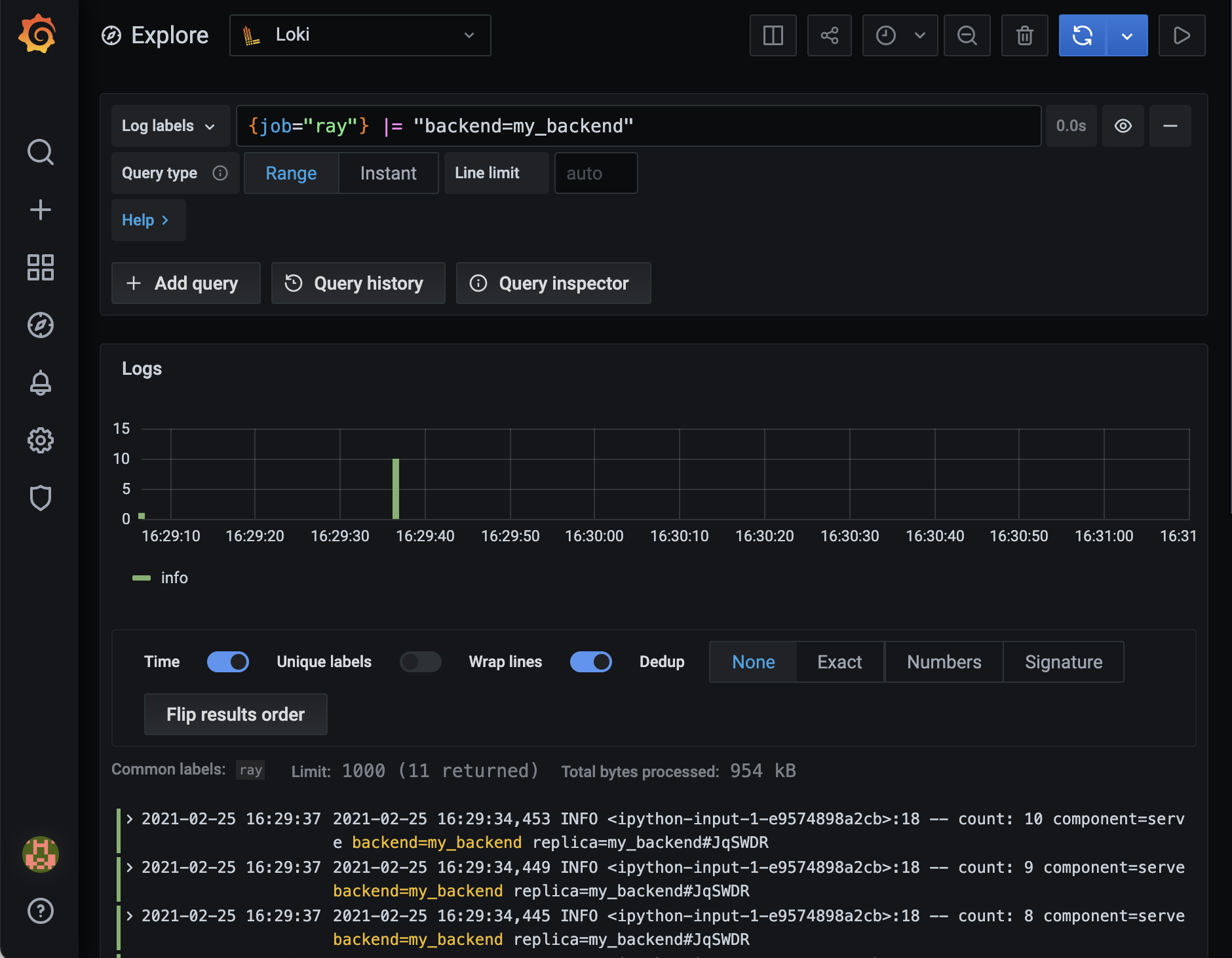 Ray Serve exposes important system metrics like the number of successful and errored requests through the Ray metrics monitoring infrastructure. By default, the metrics are exposed in Prometheus format on each node.

To see this in action, run ray start --head --metrics-export-port=8080 in your terminal, and then run the following script:

In your web browser, navigate to localhost:8080. In the output there, you can search for serve_ to locate the metrics above. The metrics are updated once every ten seconds, and you will need to refresh the page to see the new values.

For example, after running the script for some time and refreshing localhost:8080 you might see something that looks like:

You can even define a custom metric to use in your deployment, and tag it with the current deployment or replica. Here’s an example: